There are multiple ways that you can upgrade ev3dev.

This option will likely be the fastest by far. However, by re-flashing your SD card, you will lose any files that were stored in your ev3dev installation, including code and installed programs.

Head over to our downloads page to download the appropriate image and then follow the linked instructions at the top of that page to flash the flash to your SD card.

Make sure that you have already configured a network connection and connected to ev3dev via SSH to use this option.

This option will be the slowest, but it is easy to do and will also make sure that other software is up-to-date.

Option 3: Upgrading only the kernel

Make sure that you have already configured a network connection and connected to ev3dev via SSH to use this option.

This will be slower than option one but significantly faster than option two. This option will only upgrade core ev3dev packages and not other software.

Confirming that the upgrade worked

After the brick has rebooted (assuming you installed a new kernel version), press About on the brick’s main menu and scroll down to “Kernel” to confirm it has a current kernel. 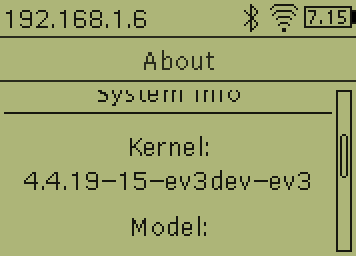